<< All Japan Baseball Tournament of public servants | TOP | Received a letter of thanks from "The Society of Rubber Science and Technology, Japan" >>

Attached is the article posted in Yomiuri newspaper

Attached is the article posted in Yomiuri newspaper (Koto Ward edition) on 28th April 2018. Contents in the article is as follows.

“This is the oldest rubber ball existed”
Mr. Miyamoto, in charge of public relations in Nagase Kenko, picked up a small ball from a shelf.
This ball was invented in 1918 and used in 1919 in the baseball tournament in Kyoto.
That was the beginning of the rubber baseball sport.
There are approximately 1,000 documents in the reference room, which includes historical rubber baseballs, photos from champion team of All Japan National Female High School Tournament in Taisho-period.

Nagase Kenko (At the beginning, started as different name) established in 1934. At that time, there were more than 200 ball manufactures. However, being influenced by war, it was narrowed down to few companies. In 1943, the factory was shut down, but the facilities remained. Because of that, Nagase Kenko were able to start production right after the war ended.
“Restoration of rubber ball started from Sumida ward” said Mr. Miyamoto.

Speed of children’s physical development has been changed with economic growth since then.
Rubber baseball has been also improved to meet children’s development.

There is a new ball “M” displayed in the reference room.
“M” ball has low bounce characteristic and similar performance as leather ball.

Mr. Munakata, managing director from Japan Softball Baseball Association (JSBB) says
“Rubber baseball has been promoted baseball sport over the century”.
As it is made by rubber, children can play safely, less possibility to get injured.
“It would make baseball more enjoyable if you visit the reference room and get to know rubber baseball history” Mr. Munakata commented. 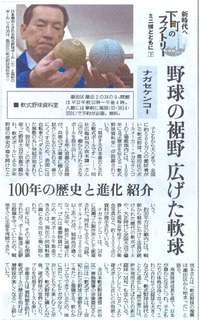